About Us and The Game

WELCOME TO OUR PARTNERSHIP 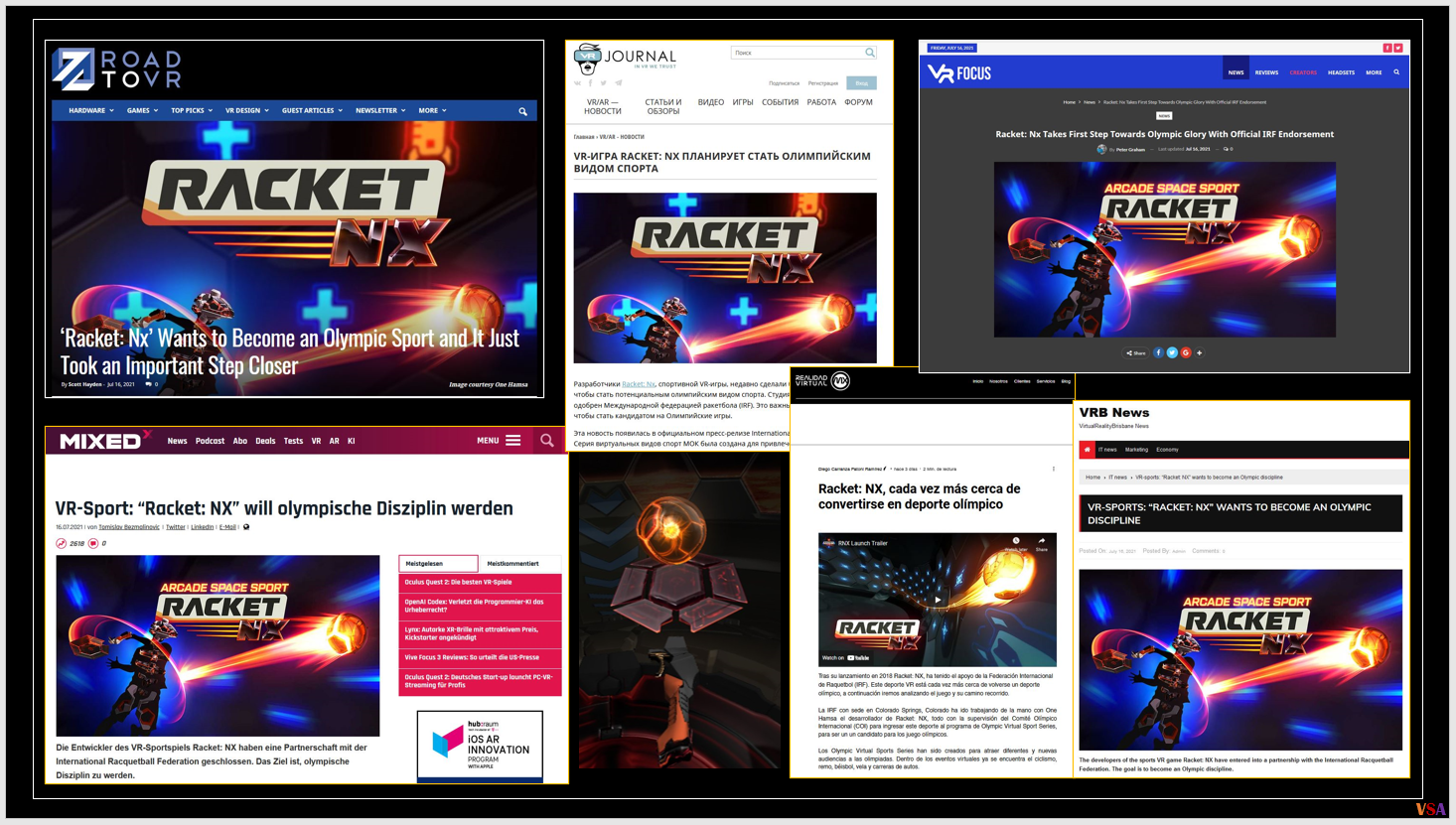 On July 1, 2021, the International Racquetball Federation [IRF], in Colorado Springs, Colorado, USA, One Hamsa, in Tel Aviv, Israel, and the Sport:Next – the Metaverse Sports Association [MSA], near San Francisco, California, USA, made history.

They signed the first ever Memorandum of Understanding [MOU] between an IOC-Recognised international sports federation, a developer of virtual reality games, and the world’s only Metaverse Sports Association.

The IRF officially endorsed One Hamsa’s VR game, Racket: Nx… the first time this has happened. And the three agreed to “develop… Racket: Nx as a potential full Olympic Virtual Sport and an eventual candidate for the Olympic Games.”

Ours was the first such agreement with a fully immersive virtual reality game, on platforms like the Oculus Quest 2 and the Pico Neo 3, whose price point, size, and portability enable full general adoption. 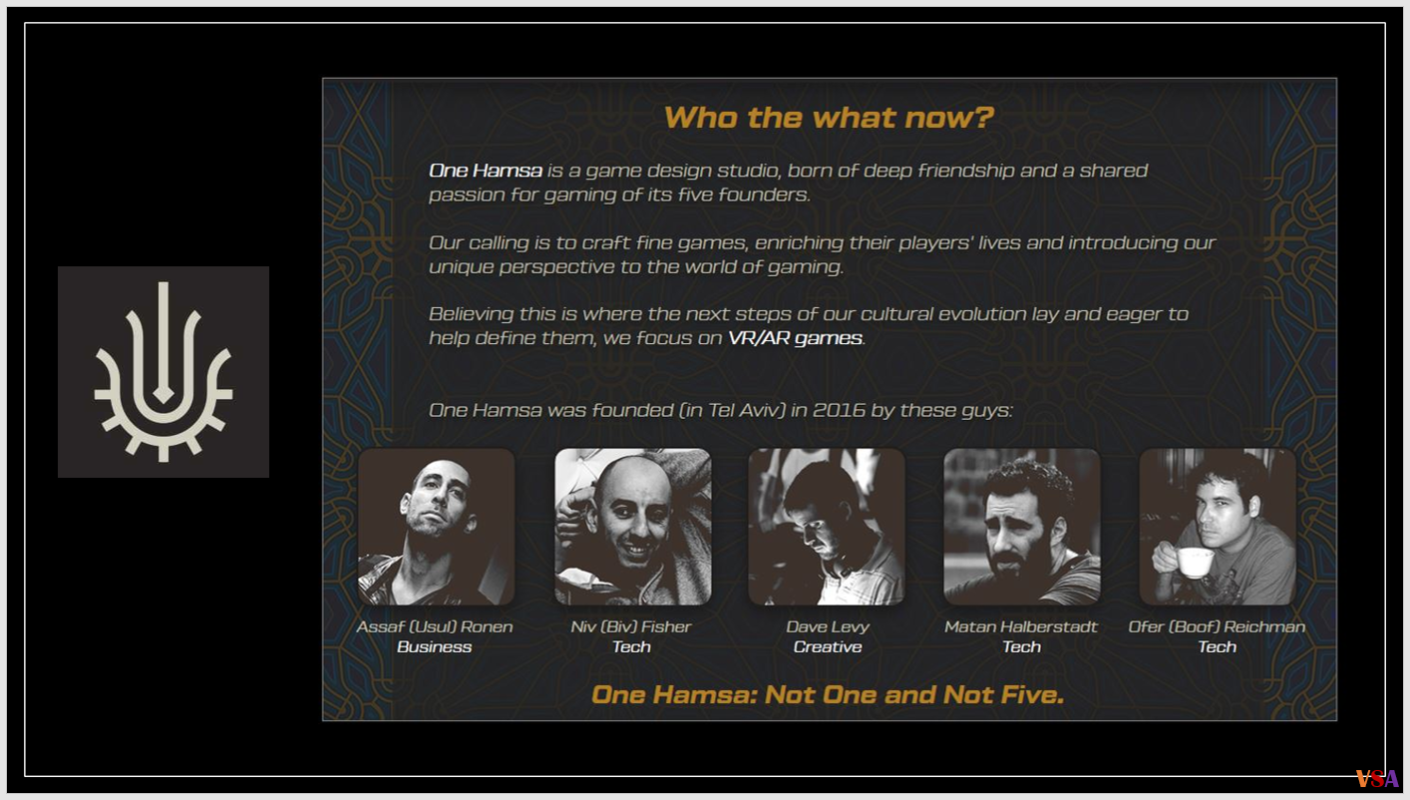 WE ARE SERIOUS PEOPLE 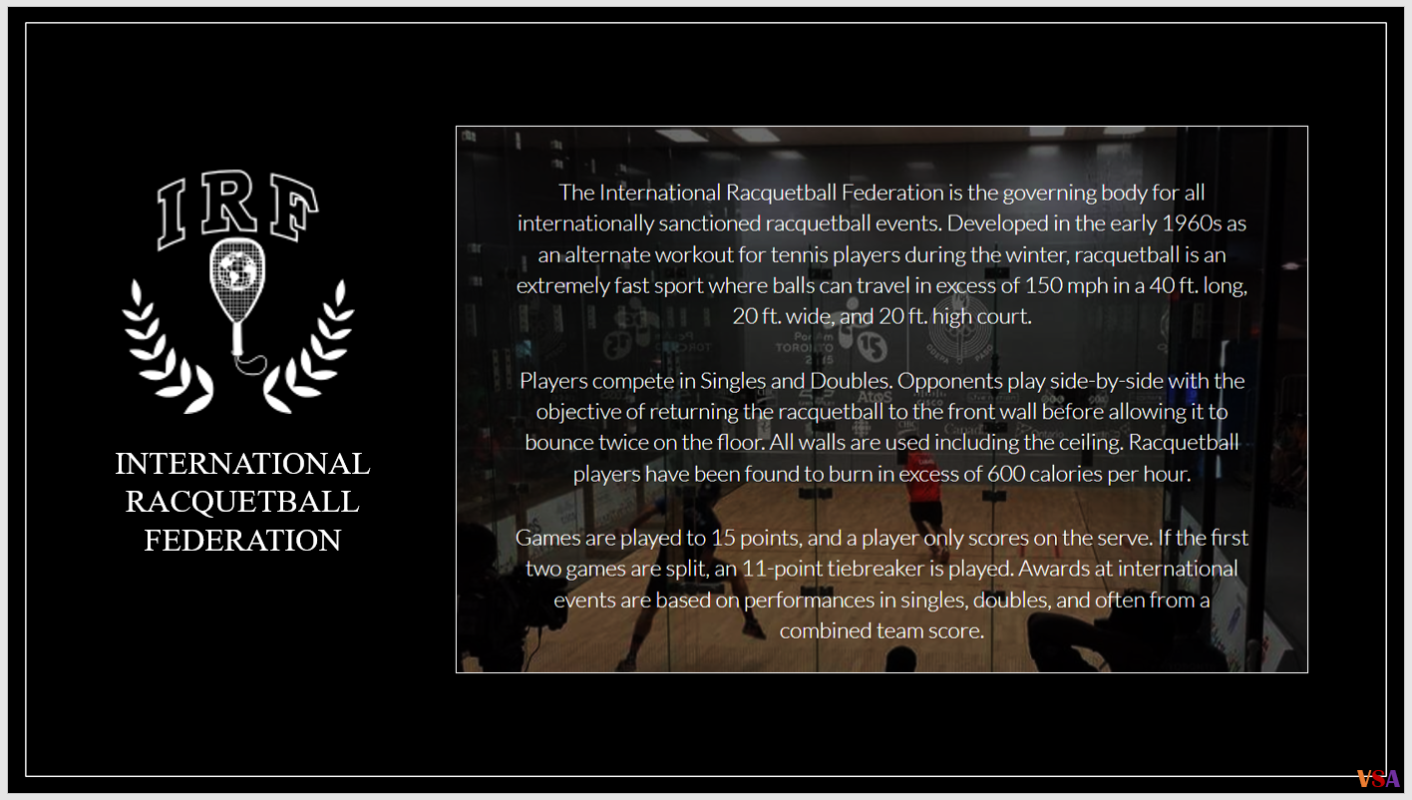 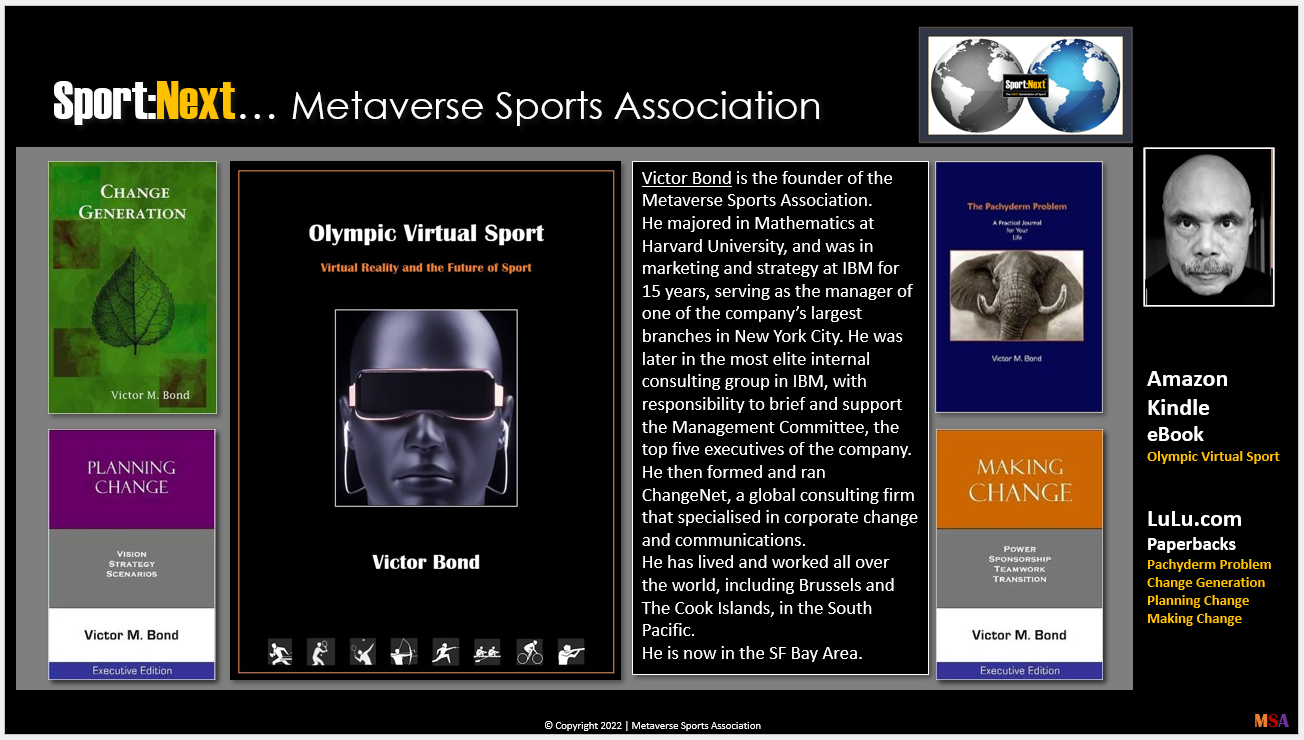 The Best Virtual Racket Sport in the World 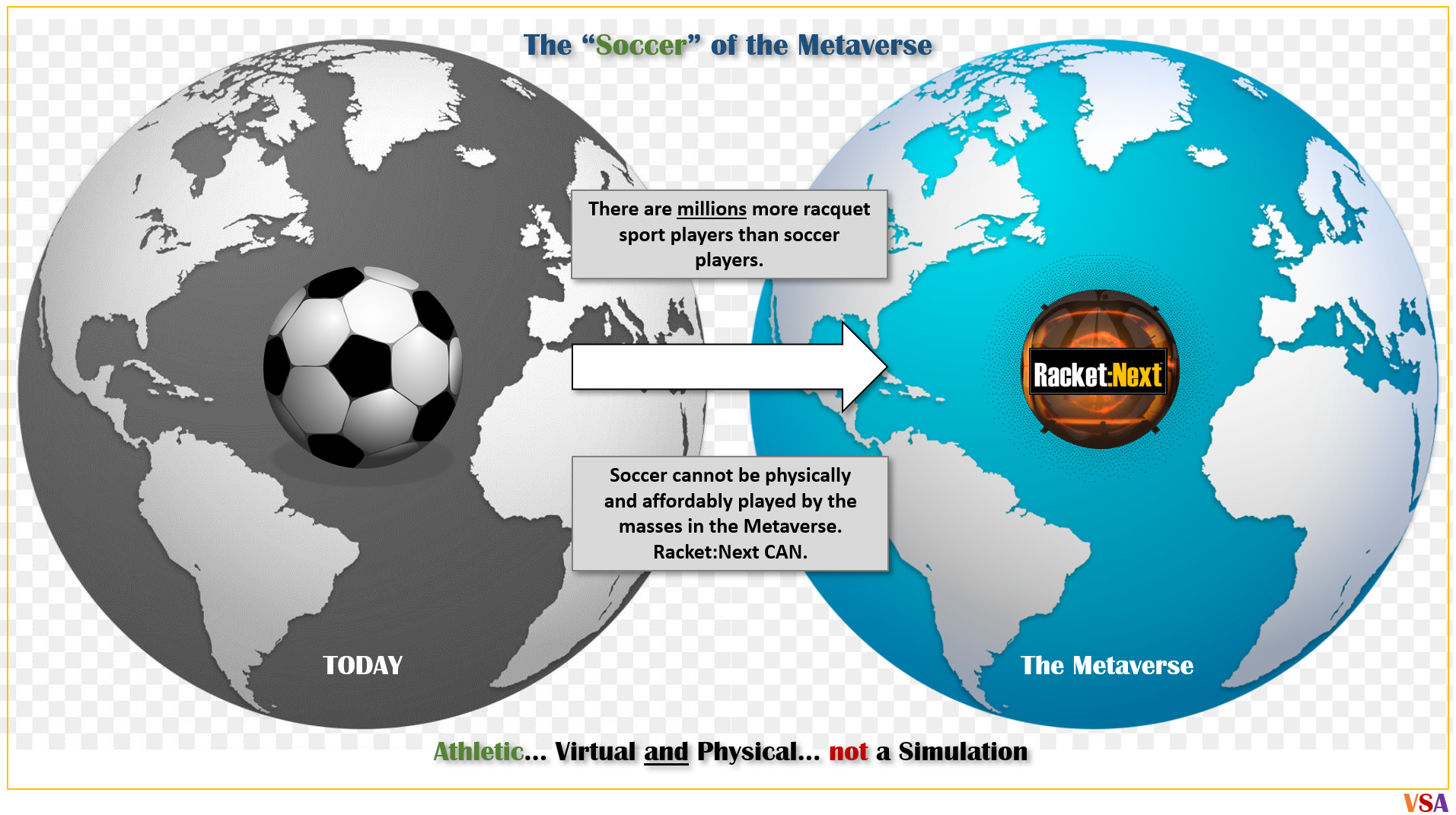 In order to be an official, international federation sanctioned sport, a VR game must be clearly derived from its parent sport[s], sufficiently like those sports that it can be used as a training aid, and precise enough to clearly separate players of different skill and effort, even at the highest levels of competition. Speaking of players, robust multi-player is a must. And it would help if such a game were already widely popular and well-accepted and reviewed.
Finally, it wouldn’t hurt if it were well and truly gender-neutral.
Racket:Next checks all the boxes.
[Click each one below.]

Racket:Next is clearly derived from and reflects the essence of racquet sport, across the full range, from racquetball to tennis to badminton and squash. 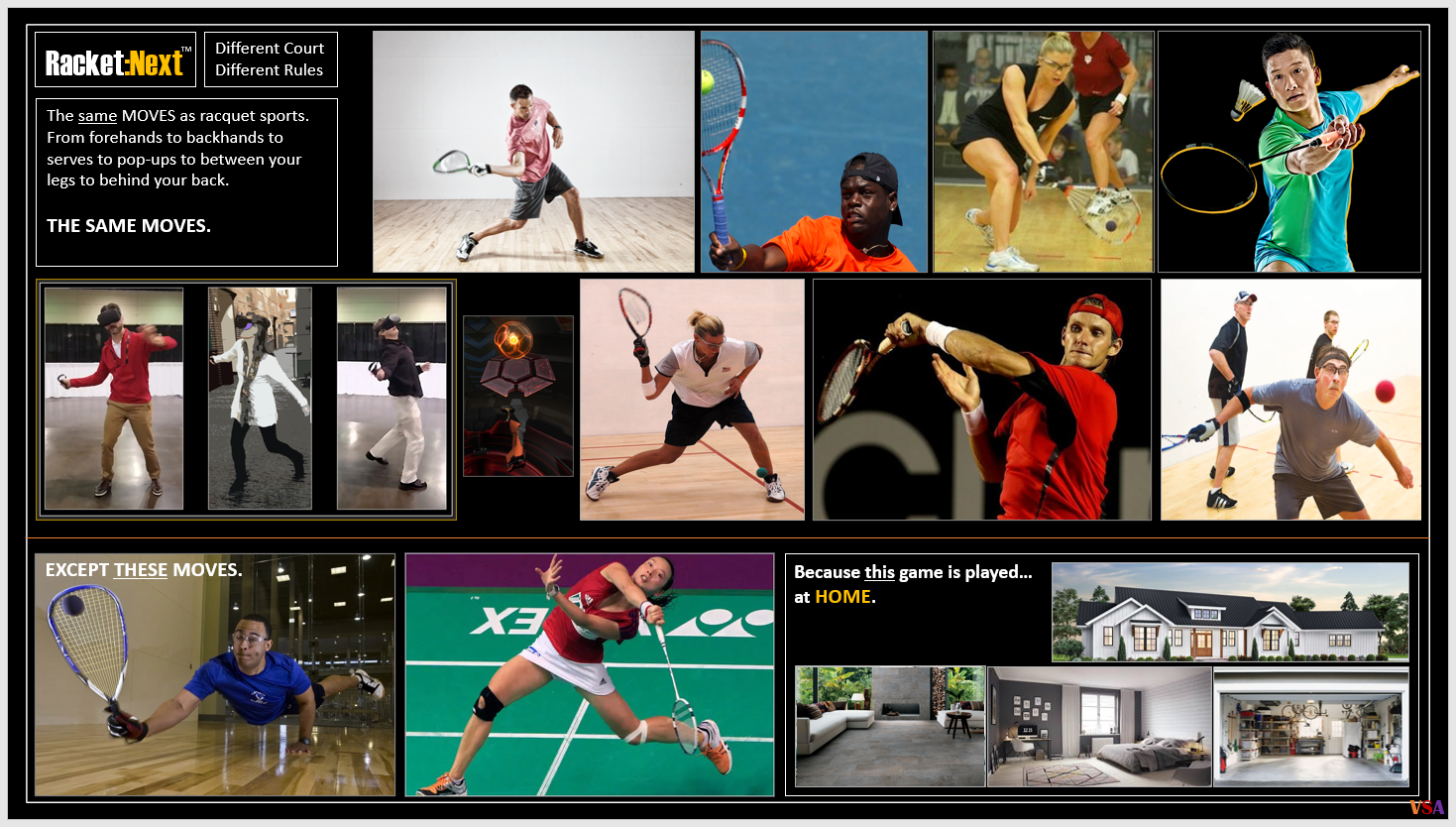 Similar enough to be a training aid, to keep skills sharp, at home. 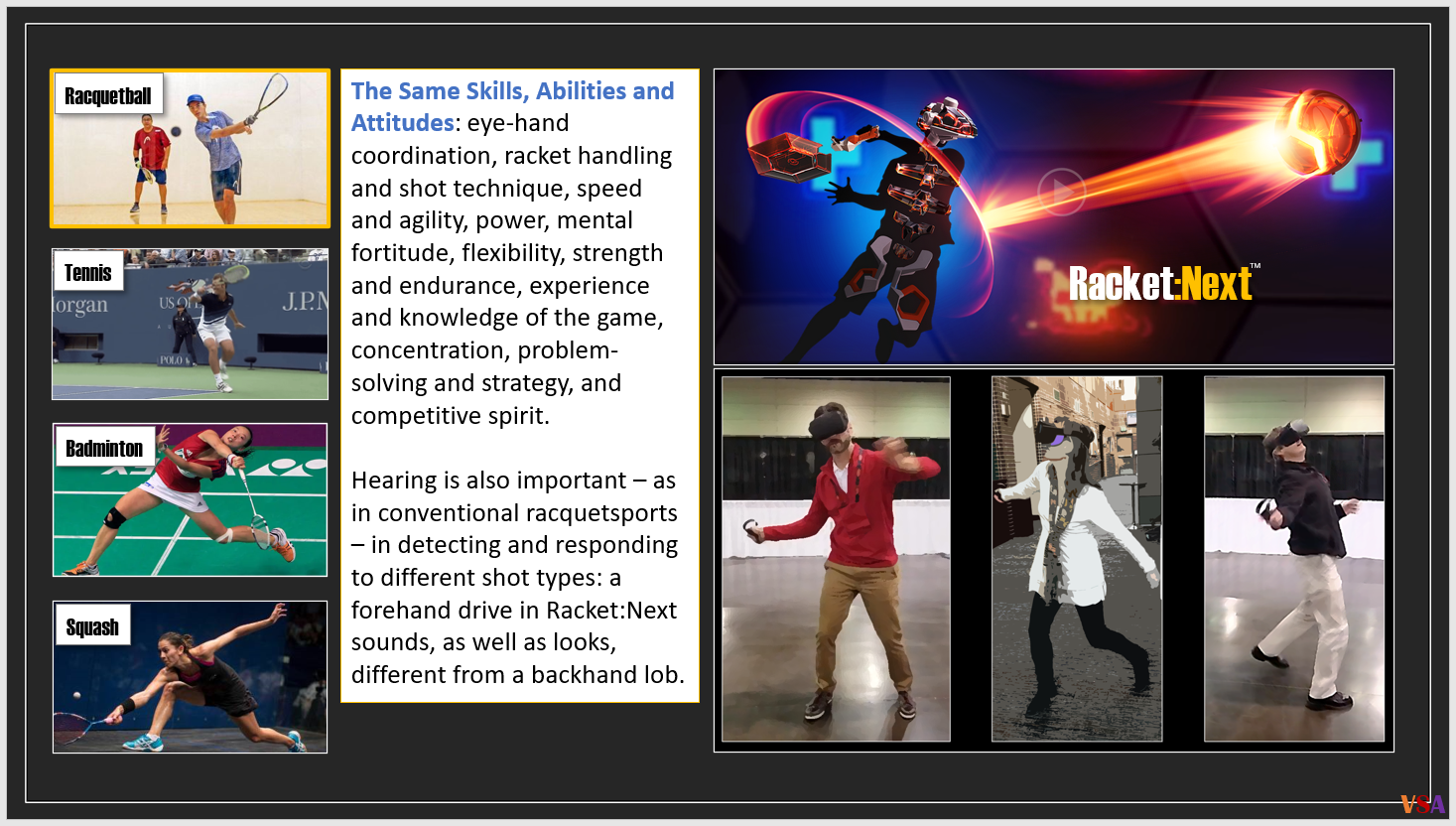 Many VR games are fun. Very few are precise enough to qualify as an official sport, precise enough to separate the finest differences in player skill. Racket:Next is that precise. Watch this two-minute display of insane skill to understand. 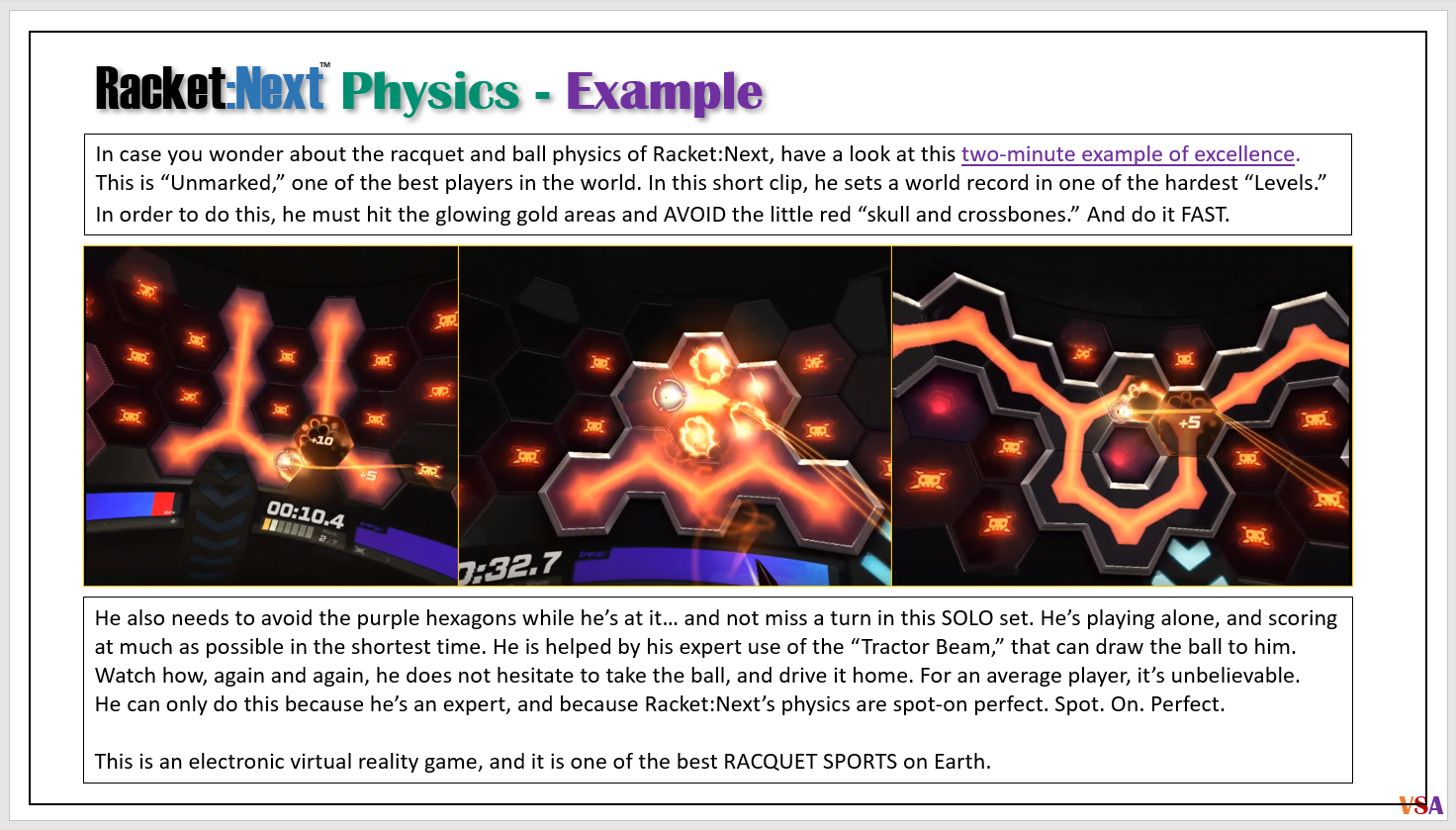 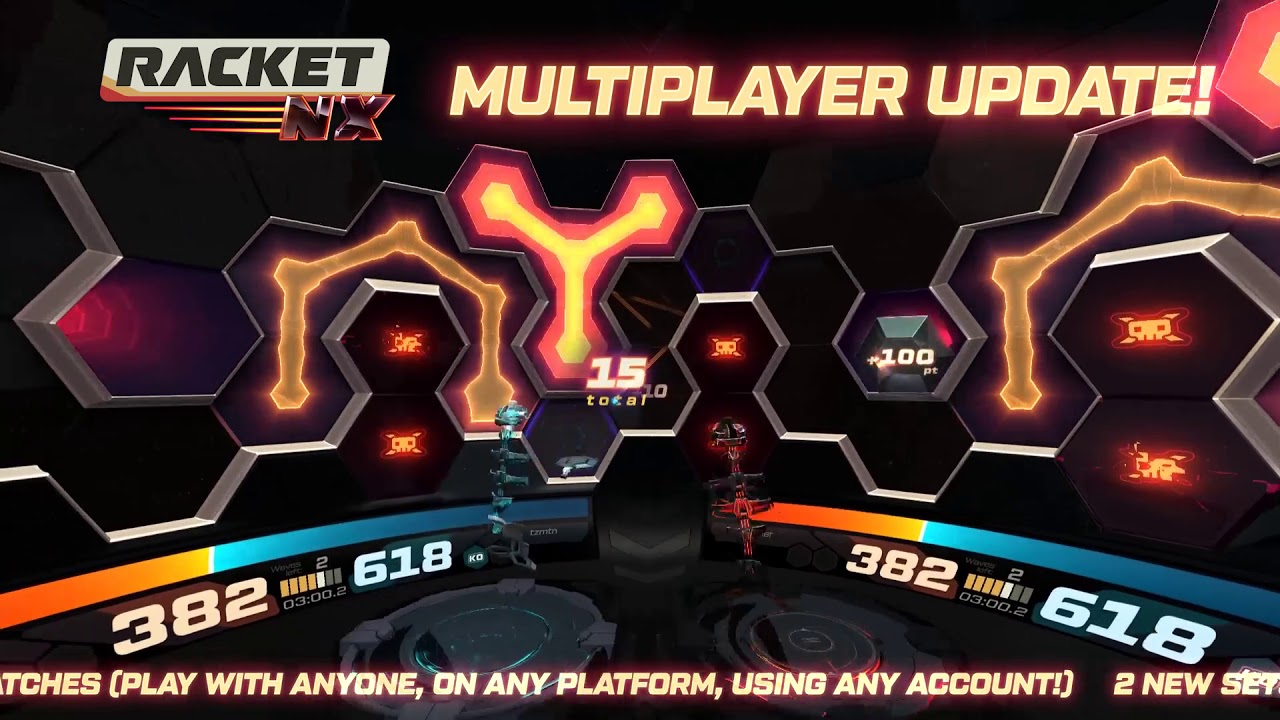 Racket:Next has been on the Oculus Quest’s Top 20 Best Reviewed List for years… every month. No other game has this distinction. Because of reviews like these. 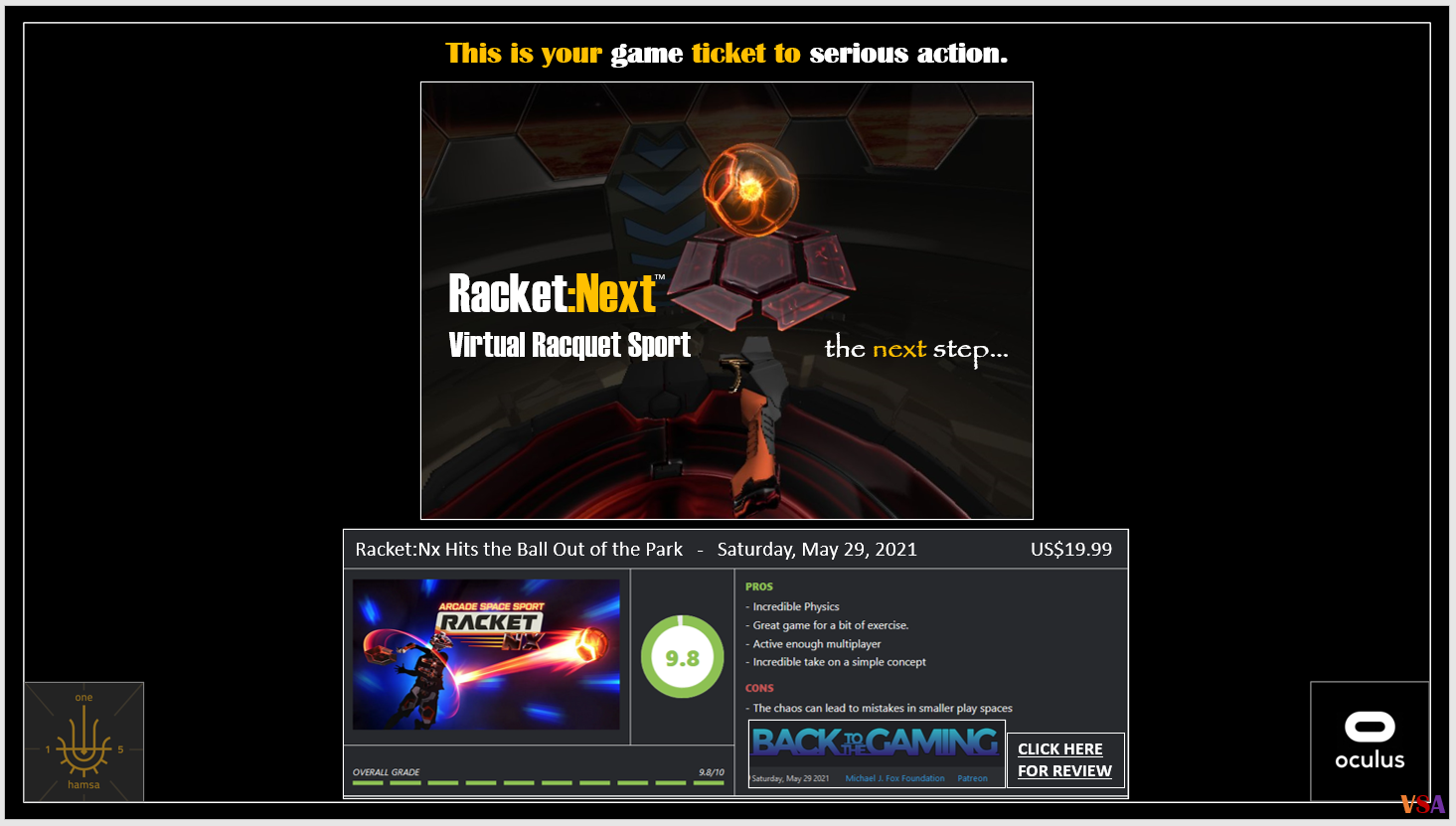 Really… in terms of force dynamics and reaction times. The key skills are common to men and women. 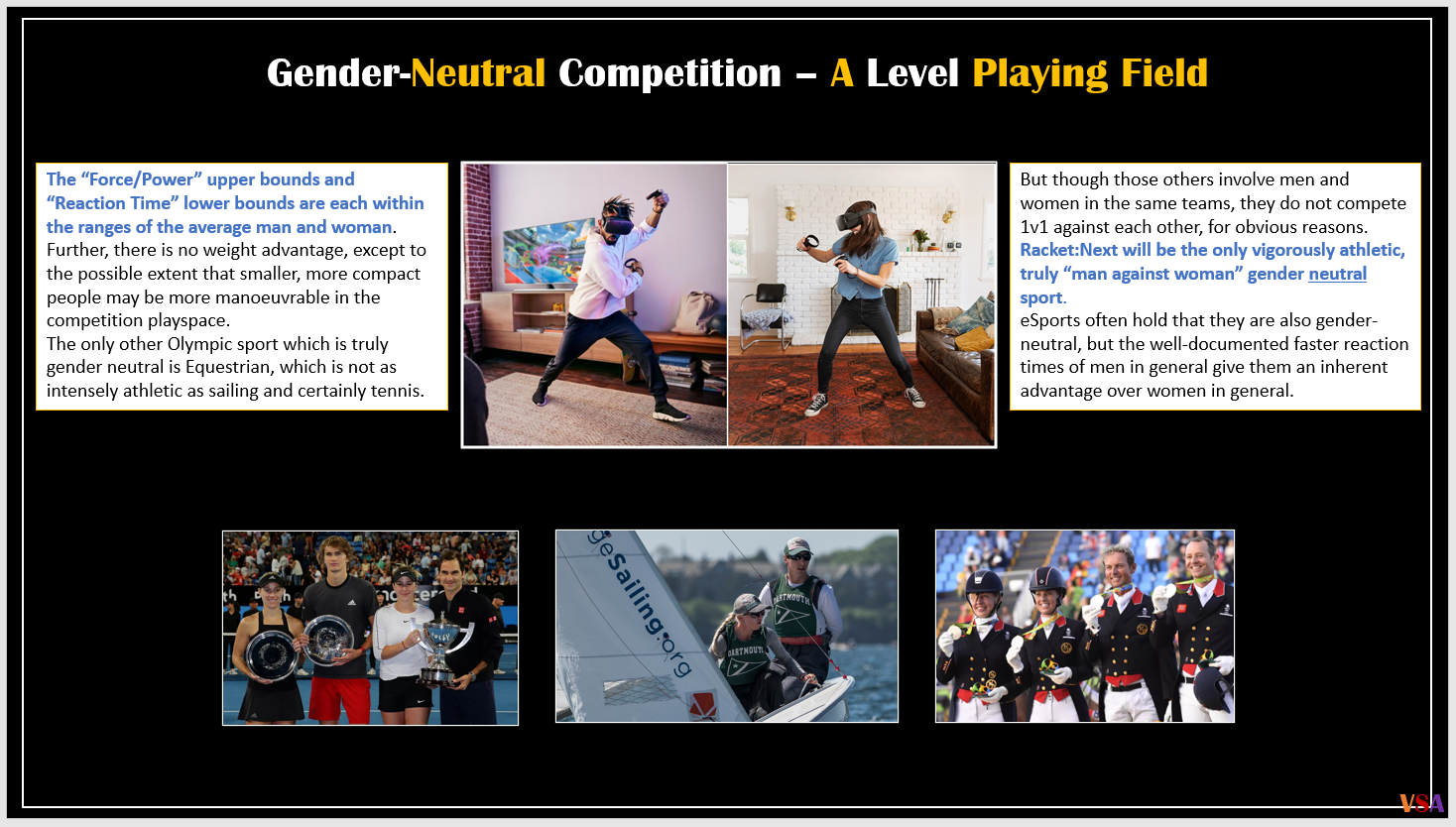 You won’t believe how big the Play Dome is when you’re playing IN YOUR HOUSE!

You might as well get the headphones out RIGHT NOW, for YOUR OWN TUNES! And get your EYES ready too… really.

You have got a racquet in here with a TRACTOR BEAM on it. Get ready to ROCK some rocks.

Make matches between ANYWHERE and ANY OTHER WHERE. And ANY TIME. And oh yeah, with ANY ONE.

If you know what this is, you already know it’s cool. If you don’t, TRUST US IT’S REALLY COOL.