This is OUR TIME. 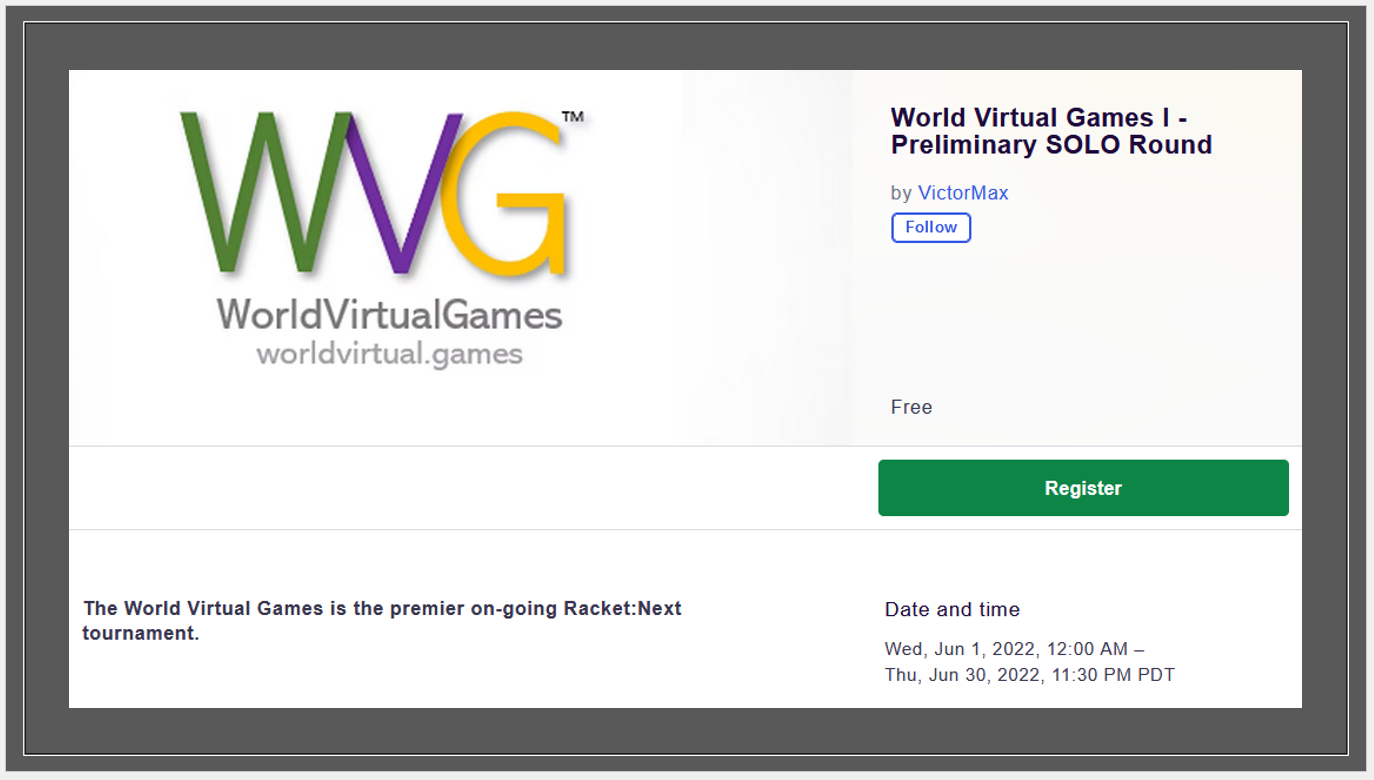 We are entering a new era of competition and tournament play for Racket:Next.

There will be four types of Racket:Next tournaments:

The World Virtual Games Series is a HYBRID tournament, with two phases [see the image below].

The Solo Preliminary Phase will also be the June Monthly Challenge.

The Top 16 players from this round will be in the “Round of 16” 1v1 Finals Round in early July.

You MUST REGISTER to be counted in the tournament, in the Solo Round. For this event, Solo registration is FREE.

To compete in the Finals PvP Round, you must register as well as an official Virtual Athlete, with the One Year Season Pass [$10, plus processing: $2.24].

Register above or below on this page [click on the WVG logo].

You have the options to:

Register for the free Solo Round ONLY.

Register for the free Solo Round AND for a Season Pass, as an official Virtual Athlete.

Either way, you MUST register for the free Solo Round, so that we know who is actually competing in this event.

Future official Solo tournaments or hybrid tournament phases MAY OR MAY NOT ALSO BE Monthly Challenges as well… THEY MAY BE SEPARATE EVENTS.

Future official tournaments will not necessarily be monthly… and they may also span MULTIPLE MONTHS.

We will also occasionally conduct FLASH tournaments that may only be one week in duration.

Finally… there will also eventually be multiple tournaments occurring AT THE SAME TIME.

In any case, for each tournament in which you want to compete, you will need to REGISTER FOR THAT SPECIFIC TOURNAMENT, EVEN WHEN YOU ALSO HAVE A SEASON PASS [So we know who’s playing in that event.]

If there is a cost for any tournament, and you also have a current Season Pass… that tournament will be FREE for you.

So… why register for EACH tournament? Even if you also have a Season Pass?

So we know who’s playing in each event… it matters going forward, so that we can see who’s doing what… and who likes what. So we can design better for you in the future.

And… why buy a one year Official Virtual Athlete Season Pass?

What’s behind all of this?

Why is that important?

Because we have a chance to attract the sponsorships and other benefits that come from BEING BIG.
Which means the chance to generate serious awards and prize pools for our players… for YOU.
Which means the resources and ability to make changes that IMPROVE and EXTEND all of our competition modes.
The way we earn those privileges is by dramatically increasing and maintaining PARTICIPATION.

This means attracting new players to this great game and it means getting inactive players “off the bench” and back in the game.
AND KEEPING THEM IN THE GAME.
This is one of the many reasons that we are emphasizing Solo competition AS WELL AS PvP competition.
We want the path to active play to be as clear and easy as possible for everyone in VR.
And everyone in the world who is not yet in VR.

This is a lot to take in… but take it in and share it with everyone you know. And we want to hear your questions and ideas.

Please post your questions, comments, and suggestions on all of this to the tournaments channel.

We will respond every day.

Now… go help get the world in this game… in this SPORT. 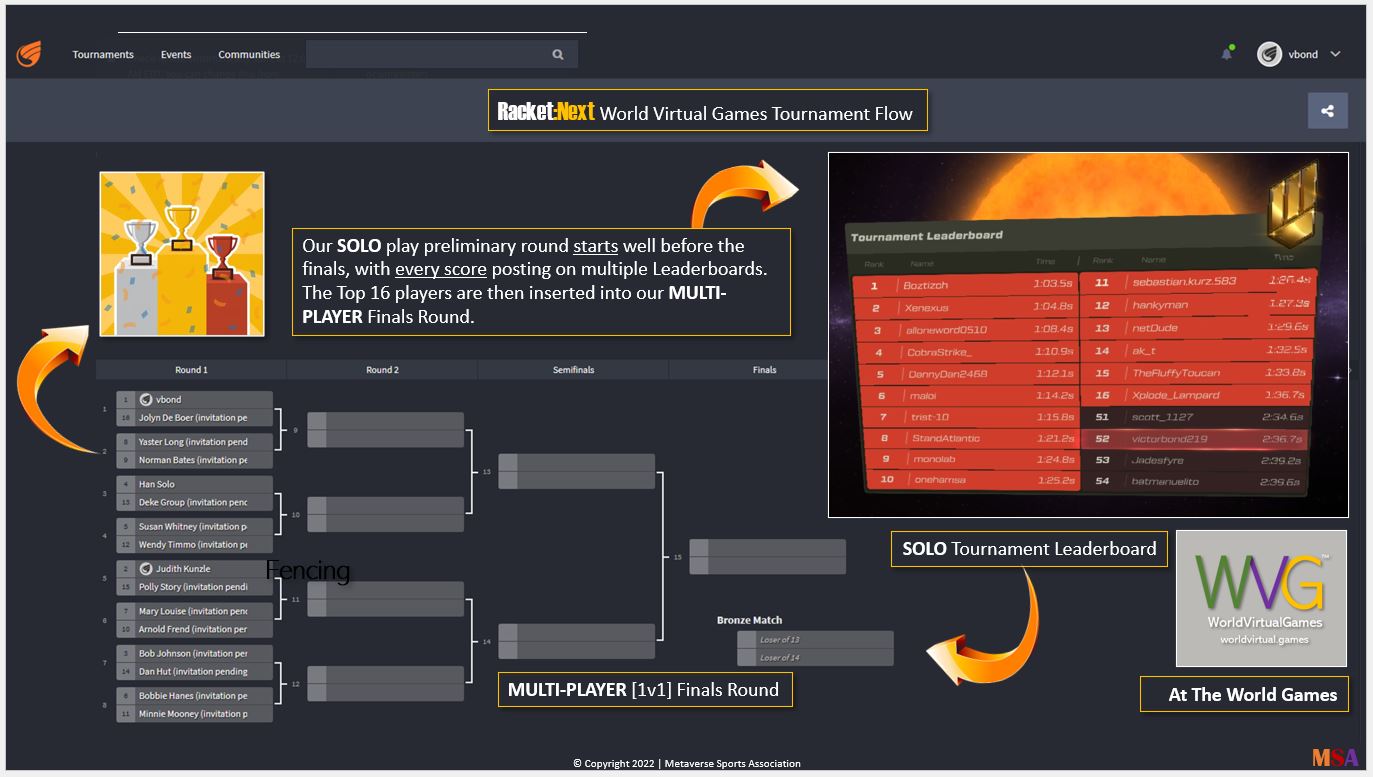 See below for a brief Rules Summary. Please note that competition requires the use of the Quest Stationary Guardian Zone or equivalent [a two meter circle]. This is to establish a “level playing field” for everyone. This rule will originally be on the Honor System and will eventually be monitored by phone video.

Also note that network anomalies that produce lag or other interference are to be considered the equivalent of “weather” in a conventional outdoor sport. The question of play suspension is in the hands of the Tournament Judge.

We encourage the recording and streaming of your competition.

We also urge you to play hard and follow-through on every point. This will be natural for those of you who are already racquet sports players. Also, it’s great for your fitness. Finally… we have a chance to build a fan base, and to do so play must LOOK exciting. 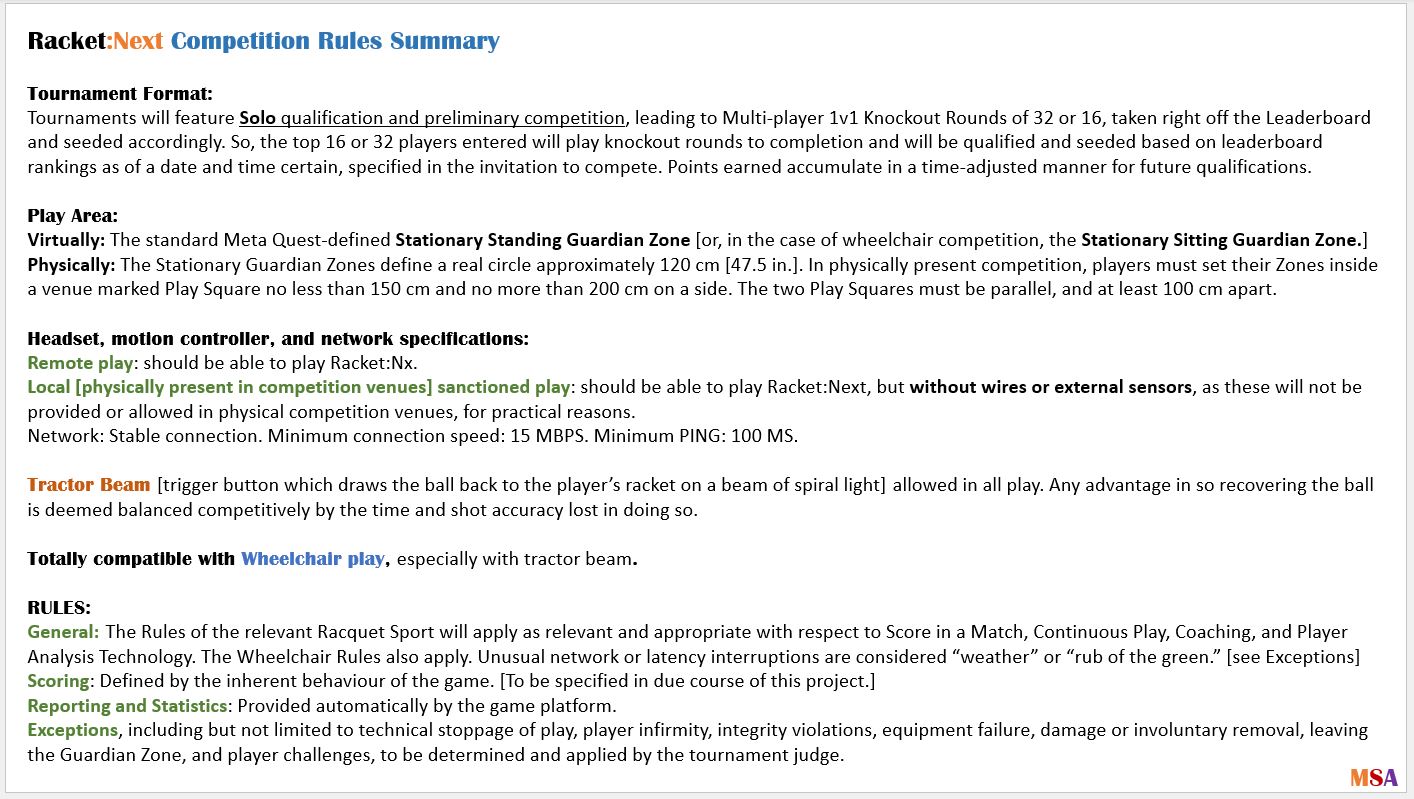 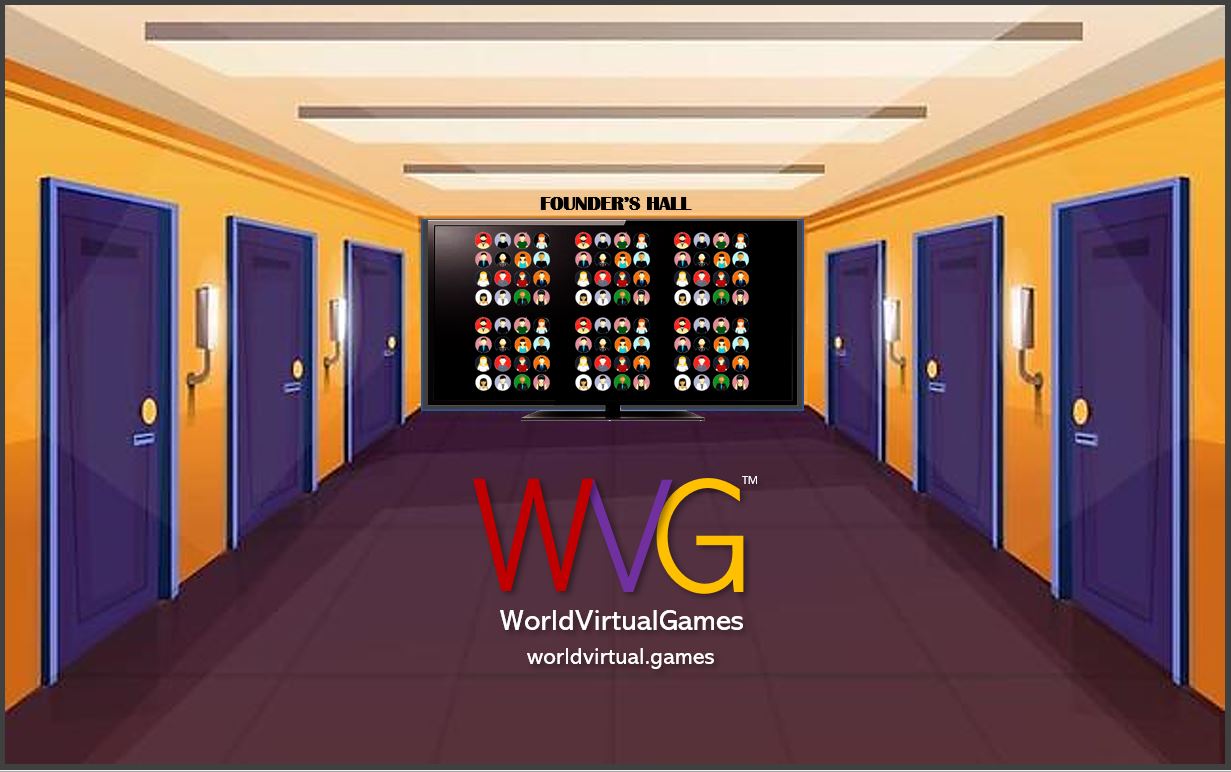 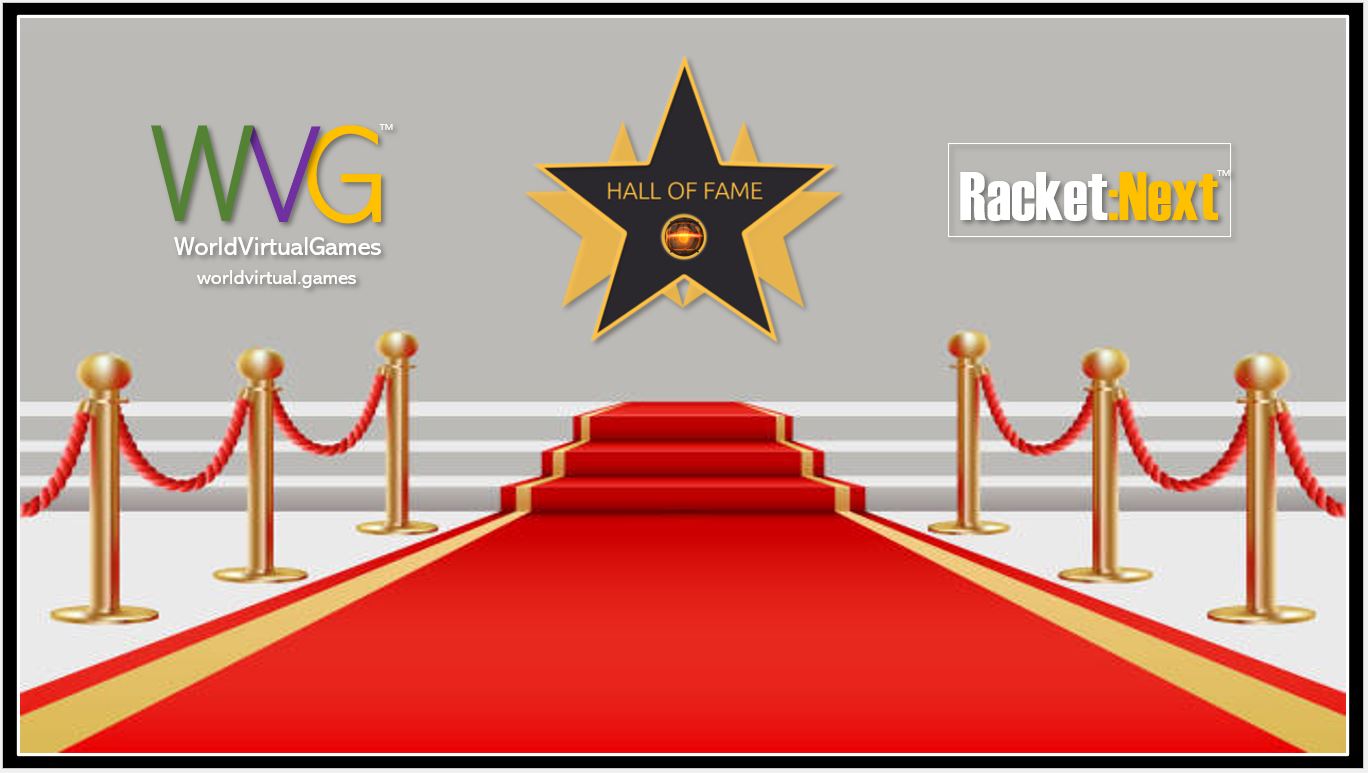 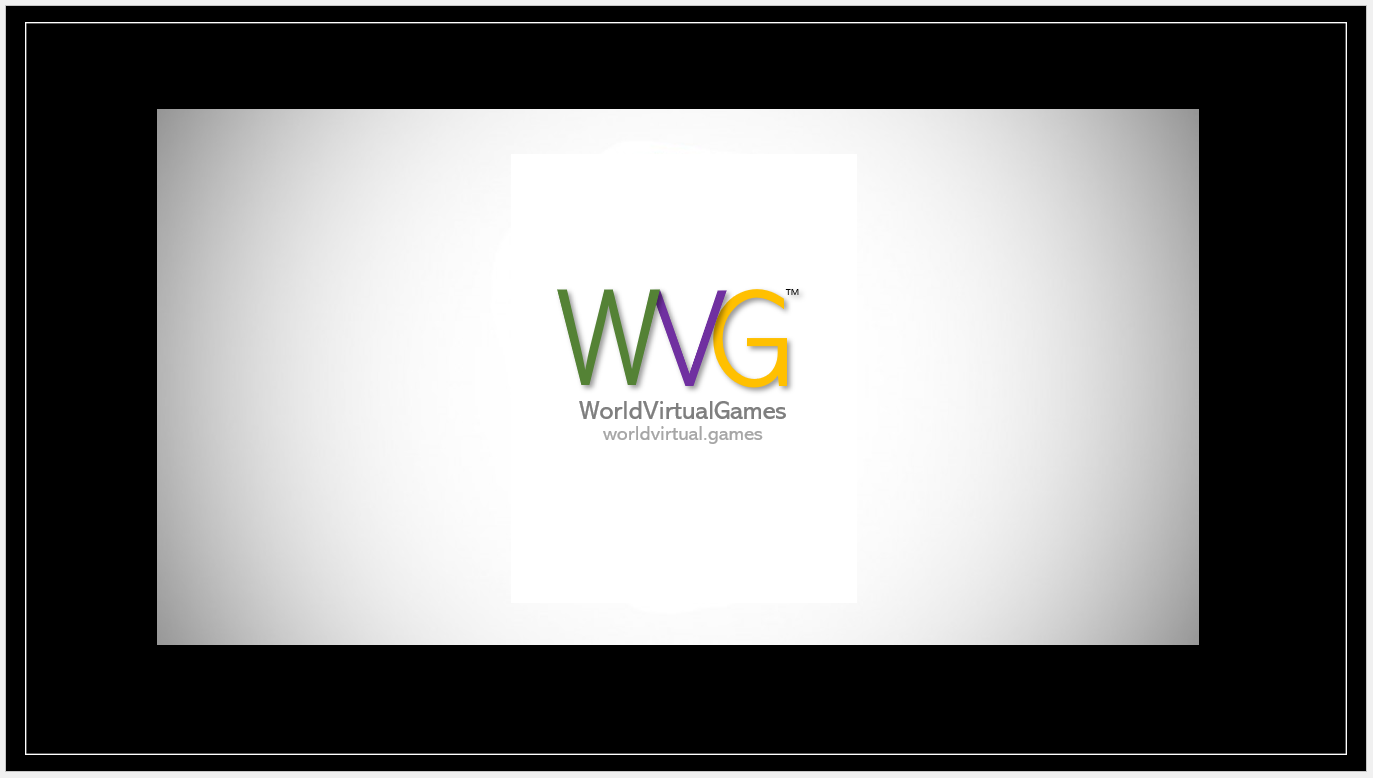 What Sport Are We Playing?


Some you have asked: If this is an Official Sport. is it also an official sport level set?
THE ANSWER IS… ABSOLUTELY!

We have designed unique SOLO sets that reflect some of the key characteristics of conventional racquet sports.
The dynamic slide below describes the process, and you can see the basic design which we created for the International Racquetball Federation: Racquetball:Next.

This is the set that we are playing for the World Virtual Series. In future, with the endorsement of other racquet sports organizations, we will feature other unique sets. 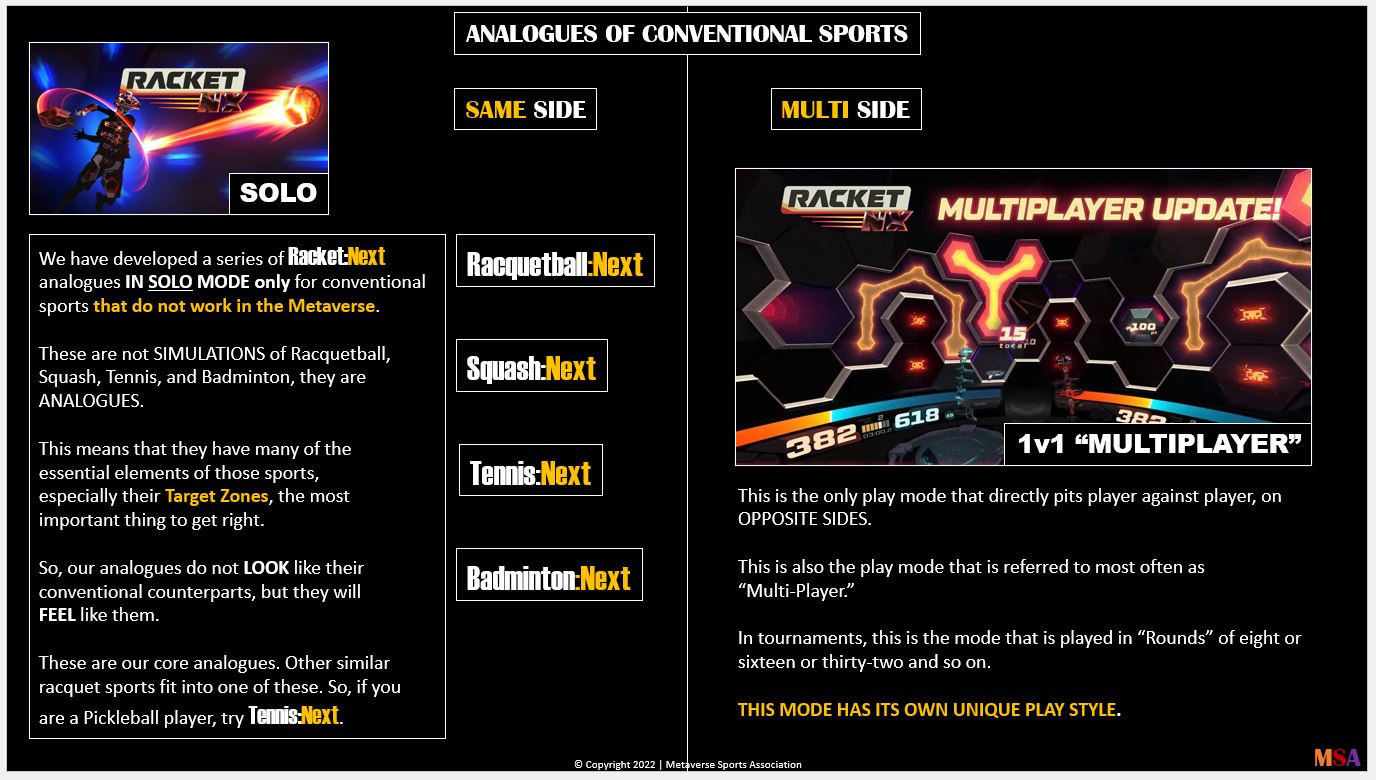 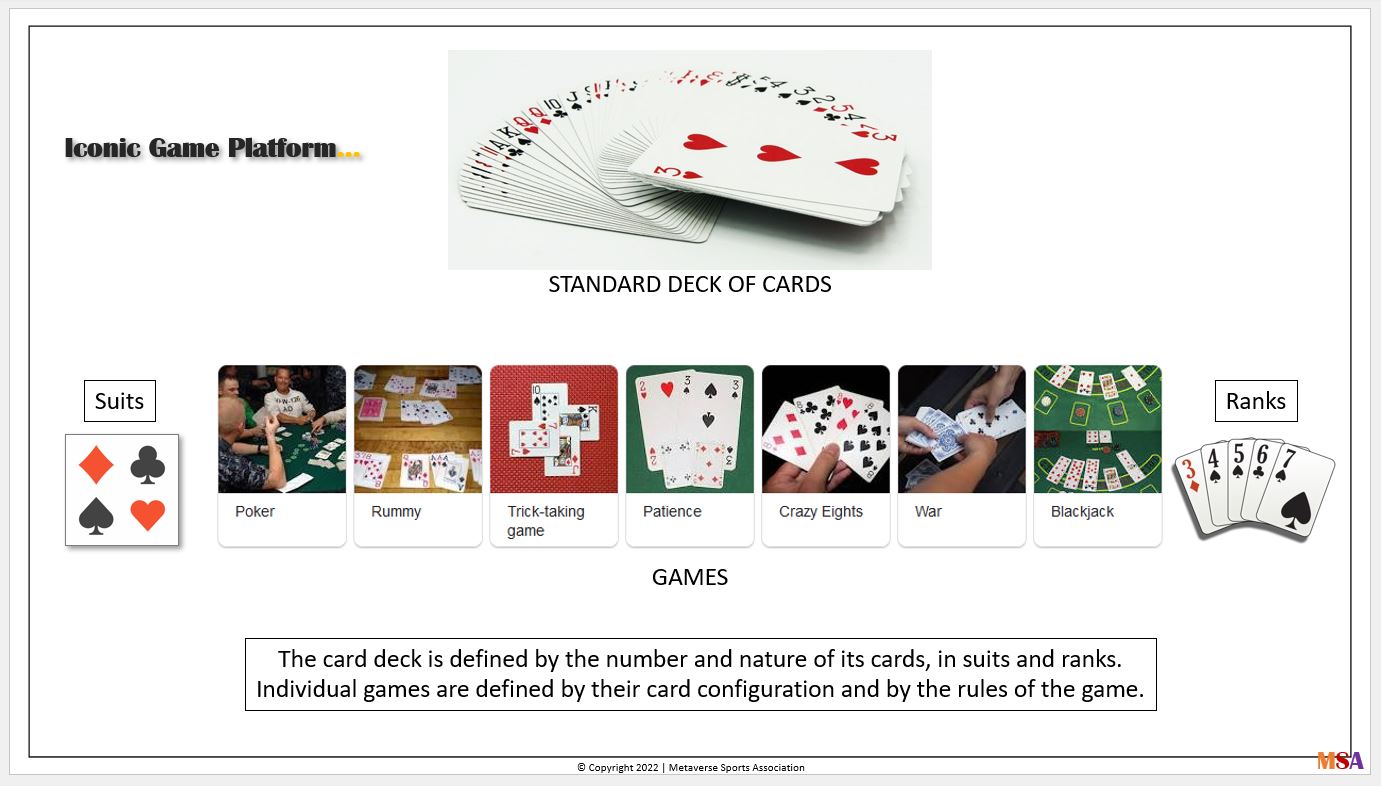 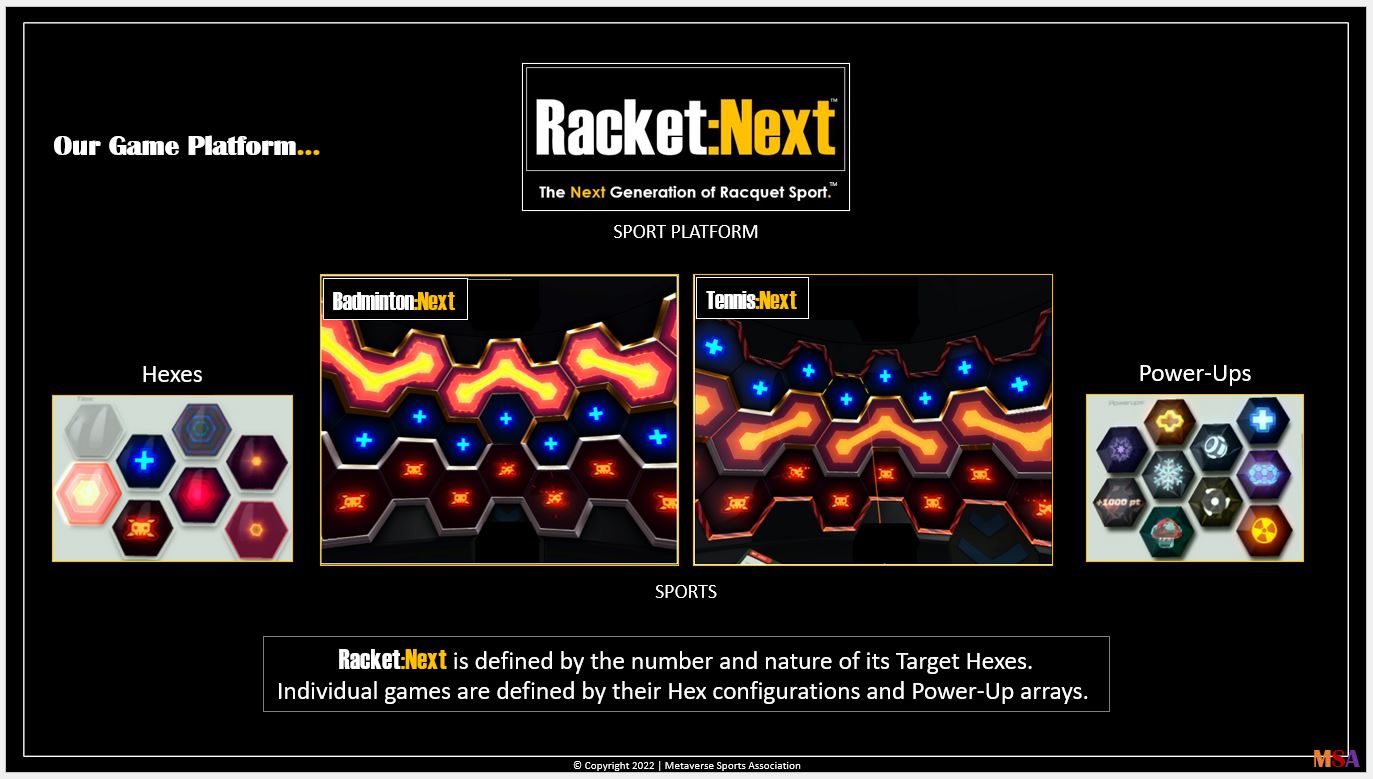 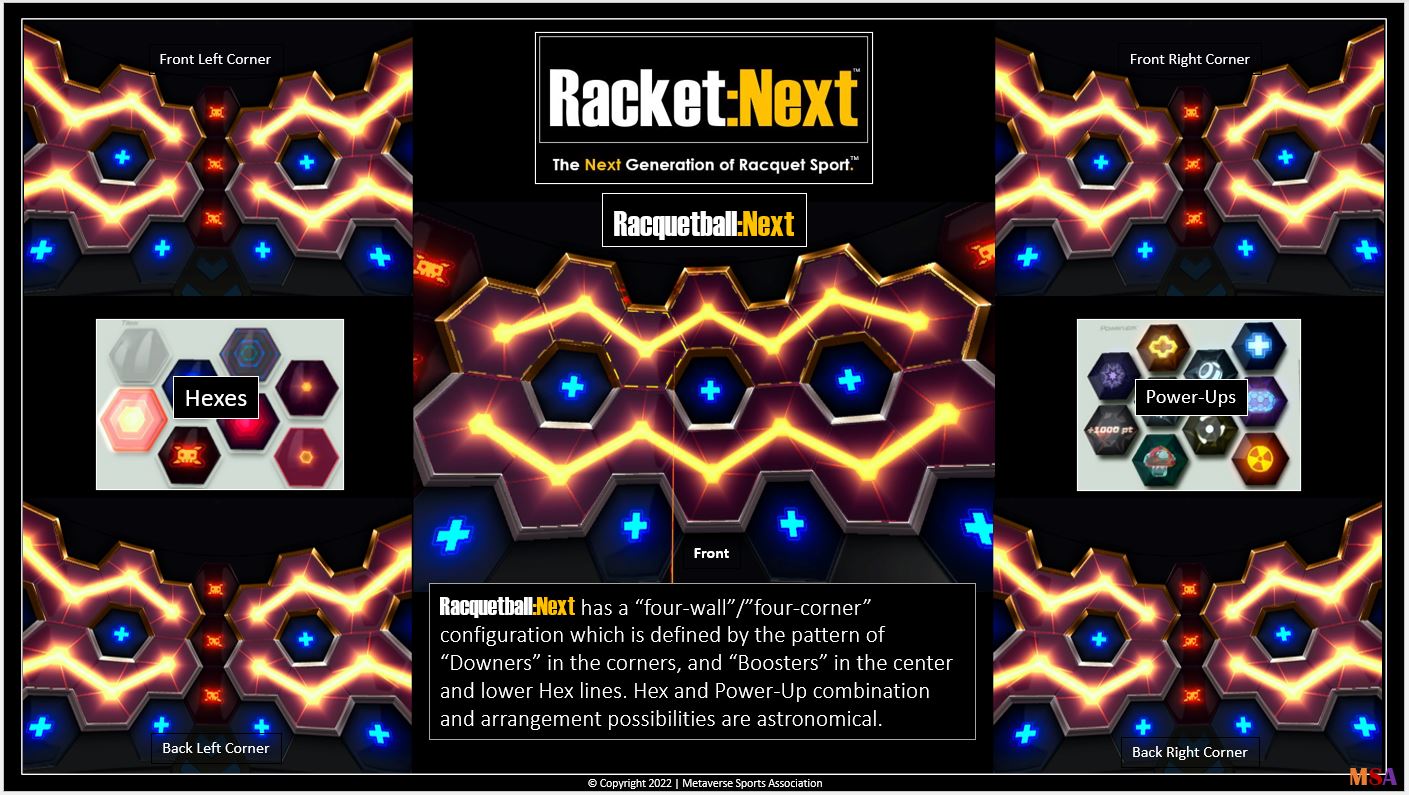 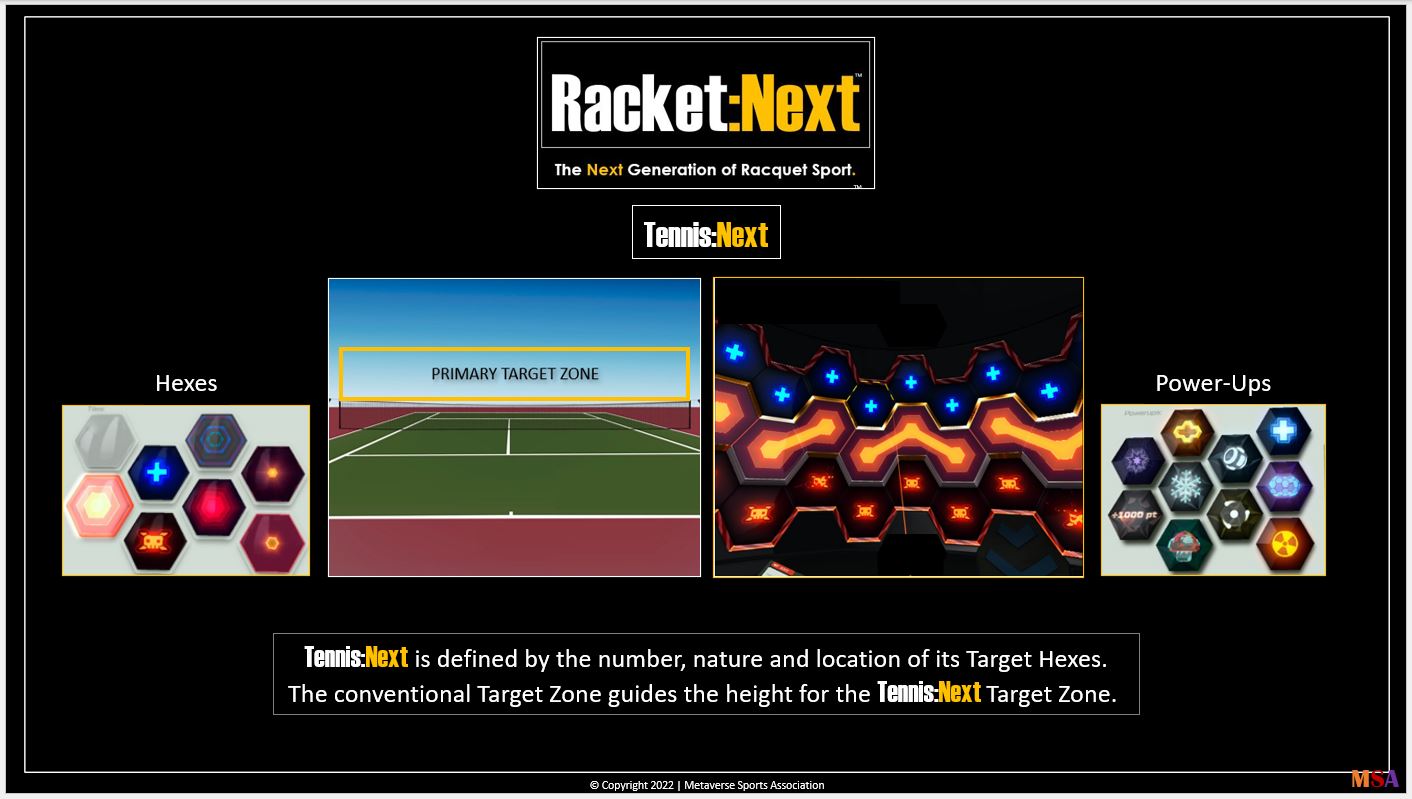 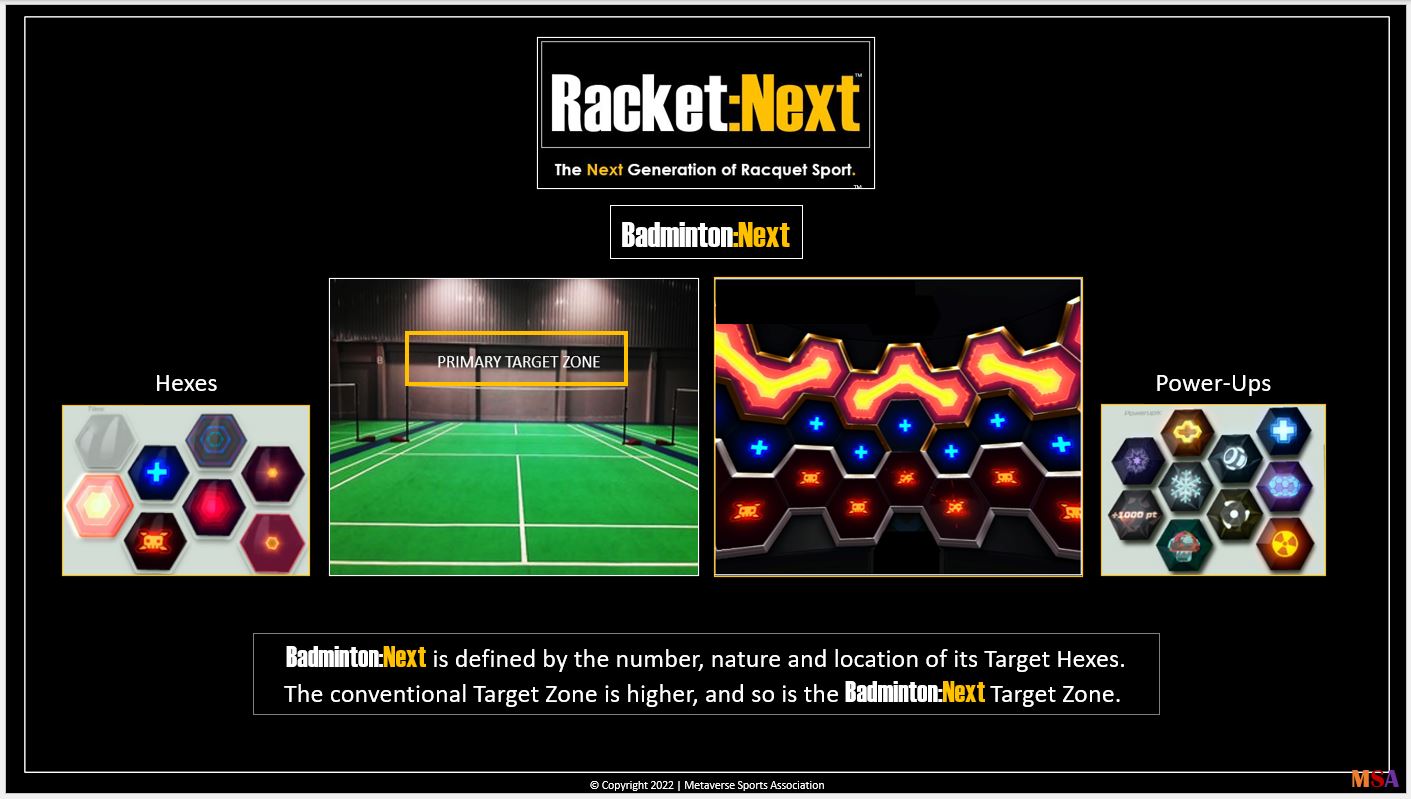 Now… watch Sinteck, one of the best players in the world, tackle Racquetball:Next!